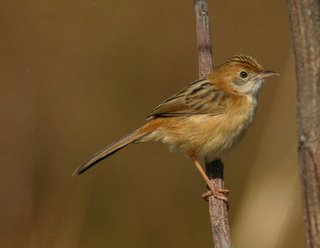 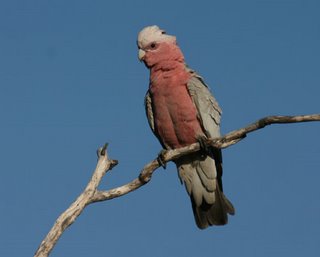 Just a quick uodate while killing time in darwin before my flight to sydeny. i have been down at pine creek, midway between darwin and katherine for the last few days in search of a couple of outback specialities. Key birds i was looking for were hooded parrot and gouldian finch. on arriving in the town and asking the locals i wsa told i was out of luck for for the finches as they were allat edith river.
I decided to spend the last light of the day having a quick mosey around the town for good looking sites to try the next day, not really expecting to see much. i was scrambling up a hill on the west side of the town, climbed over a small ridge, and there in front of me was a large flock of small parrots, a quick look with the bins conformed them as Hooded Parrot, a supposedly rare and difficult bird to see, there was 42 of them right in fornt of me, without even trying. The birds proved very easy to see and over the next few days saw them well at several different sites.
Also good on the first evening in pine creek was catching up with some relatively common australian birds that i hadnt seen elsewhere including red backed kingfisher, pied butcherbird and grey crowned babbler.
A good look around the bush around town on the first full day produced Northern Rosella along the old railway line (not to e confused with the new one for obvious reasons), black faced woodswallow, white winged triller, mistletoebird, pallid cuckoo and brown quail. As only a birder could be, i was delighted to discover the towns sewage works which gave me my first black fronted plover, grey teal, pacific black duck ,australian grebe and black winged stilt.
The final day added varied sitlla and black eared cuckoo. 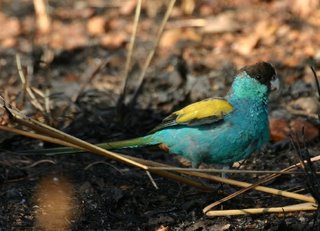