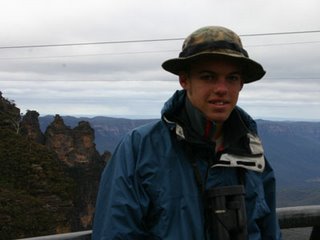 Me with the apparently famous "Three Sisters" rock formation

Am back in sydney with relatives now after leaving the blue mountains. I had been fairly disappointed as i had only seen 2 of the 5 target species for the area, rock warbler and superb lyrebird. i had a few hours to kill before getting the train so braved the rain for one final walk between katoomba falls and echo point. it ha djust got past the cable car station and practically bumped into a pilotbird feeding on the path just in front of me. it showed down to about 2 metres before notincing i was there and disappearing into the woods. i was pretty chuffed, i really hadnt expected to see pilotbird that day. i continued walking back to echo point and soon bumped into a honeyeater wave ( a flock of moxed honeyeater species moving through the forest from one flowering tree to another) i checked through them thoroughly, eastern spinebill, new holland, white naped, yellow faced and lewins honeyeater, and finally, a Crescent Honeyeater, on a branch right in front of me, then 3 more. In the space of 5 minutes my stay in the blue mountians had gone from a reasonable trip to a true success, i felt like punching the air but resisted, until the sun broke through and a blast of indiana jones theme music from the Scenic World Skway echoed down the valley and i couldnt help myself, a group of japanese tourists hurried away looking rather worried. 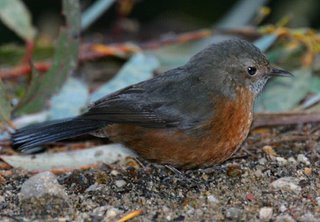 A rock warbler, being blinded by my camera flash, that'll learn it to sit still
Posted by Joe Cockram at 1:30 AM