I'm back in Sydney yet again for a short while after a good few days down in Wollongong.
On the pelagic i met acouple of english birders who offered to take me to Barren Grounds reserve. As is the usual for Australia in July it pissed it down all day which didnt help birding. However the Eastern Bristlebirds which are usually incredibly secretive were all over the place feeding on the paths. Beautiful Firetial was also seen well, as well as a Male superb Lyrebird. After Barren Grounds we went to Boomaderry Creek where we saw Rock Warbler and Yellow Tufted Honeyeater. 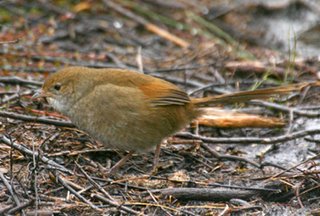 Eastern Bristlebird
Posted by Joe Cockram at 2:27 AM