Phew, what an evening! Well it would have to be to warrant such an improbable blog title.

I was out watching the wader roost at dusk, and things were looking good, with a Purple and Curlew Sandpiper joining building numbers of Ringed Plovers and Dunlin. While looking through the scope I heard a distant 'pop', looked up and saw a red flare falling over to the East, a quick scan of the sea revealed an upside down boat with 2 people struggling desperately to hold on, one without a lifejacket. The sea was really messy too, with big swells and massive breakers hitting the beach, they were clearly in really bad trouble. I rang 999 for the first time in my life and got onto Great Yarmouth coastguard and relayed the situation, and they scrambled the Wells lifeboat. After that all I could do was watch and wait, I felt so helpless watching these two strangers in their distant battle between life and death, knowing there was absolutely nothing more I could do. I waved frantically in the hope that they would see me and know that help was on the way, but I doubt they noticed.
They were rapidly drifting East with the tide so I legged it down the beach, scope, tripod and camera flying about everywhere and got to a high spot on the dunes where I could see them well enough to relay information to the coastguard guys as they rang me for updates.

Pretty soon a RIB appeared out of Blakeney Harbour and was clearly looking for the boat. I was waving them over in the right direction from the shore, I don't know if they could see me or not, but the guys on the upturned RIB noticed them and fired off signal flare to mark their position. The rescue RIB saw this immediately and hooned over to them, going over some big old breakers at the harbour mouth. They soon had the 2 stricken crew into the their RIB and began taking them back to safety, just as the lifeboat turned up. After that it looked like the lifeboat went to have a go at salvaging the boat, but it was getting too dark to see much so I left them to it.

The stricken boat and the crew clinging on for dear life 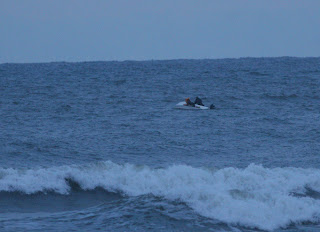 The rescuers on the way 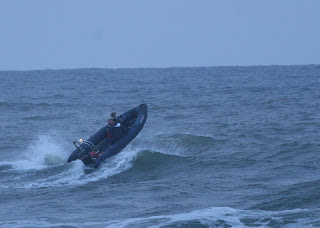 The flare being fired off 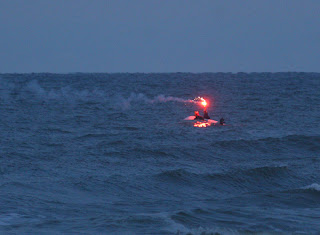 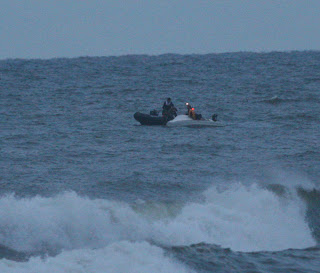 The crew being taken back in, stopping to talk to the lifeboat guys. 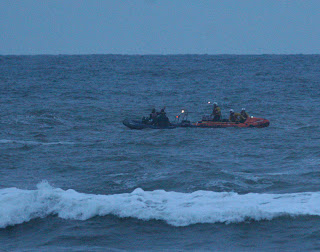 Massive respect to the two blokes who came out of Blakeney in their RIB for the rescue, I have no idea who they are but hopefully will find out tomorrow so I can shake their hands. They did a great job getting through some difficult seas. Top marks too to the lifeboat for getting out so fast from Wells, even if they weren't needed for the rescue in the end, hopefully they got the boat back.

So back to birding, i'll keep it brief:

Early morning seawatching was noticeably slower than yesterday evening, just a few Arctic Skuas and Bonxies.
The beach at dawn, with the high tide being pushed worryingly close to the dunes by the wind 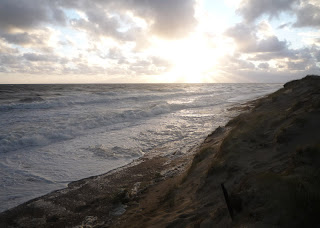 Fortunately, later on a Barred Warbler turned up at the Long Hills and showed well in an Elder bush for a few minutes before disappearing out onto the saltmarsh, and probably to the mainland 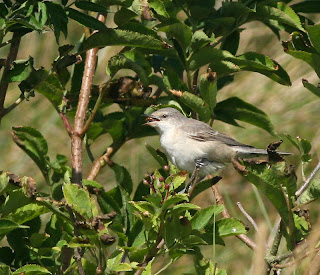 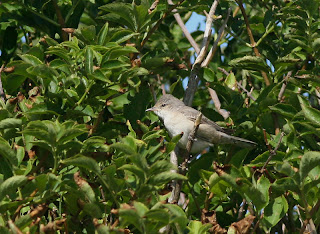 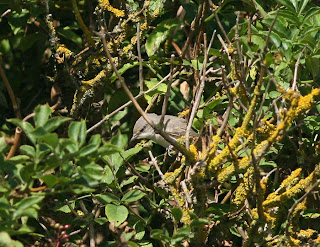 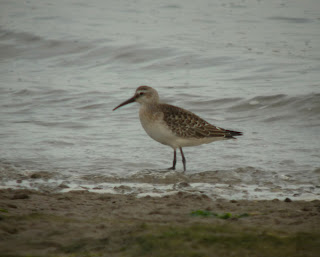 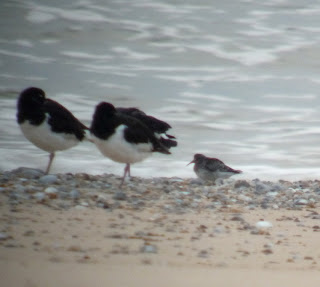 All photos Copyright to Joe Cockram

Wow! How lucky that you saw them and called the coastguard. I bet they are very thankful

Joe, keep up all the good work that you and the rest of the guys do... Bless you all!

Thanks, it's nice to be appreciated