Westerly dominated weather has slowed down the signs of migration at The Point, and I guess the rest of East Anglia too, I haven't seen anything rare or scarce since the Barred Warbler a whole 2 days ago. I don't know how I cope.
Actually I do, there's always plenty going on here.....

Yesterday, while birding around Long Hills, we found a Dunlin fluttering around and all tangled up in the suaeda and Sea Purslane on the high tide line. A quick look at it in the hand revealed that the primaries on one wing were almost  totally shorn of the actual feathery bits and as such were totally useless for flight. It looked fine in all other respects though, so i've no idea what happened to it. My best guess is that it's been hit by a raptor and dropped onto the saltmarsh, then un-able to fly or run, the tide had carried it in and deposited it. I took it out onto the open mud where at least it will be able to feed and run to higher ground when the tide comes in next. Being realistic, it'll probably die anyway, but that's no bad thing, it'll rot into the mud and be devoured by the very invertebrates that its congeners will feed upon, and the world will keep spinning. I know it's best not to intefere with nature, but it's so difficult to simply walk on by when seeing something like this, hopefully i've given it a better chance of survival. 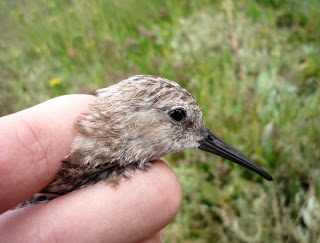 This could be the cause of the Dunlins demise, he's been hanging around for a few weeks now, making a good living out of the waders 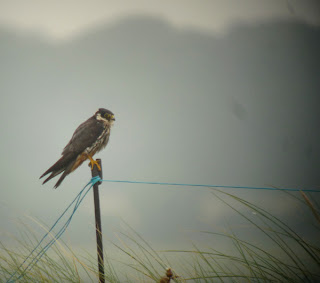 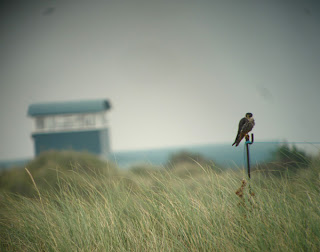 Spring tides at the moment are making it a bit awkward to get around The Point a few hours either side of high, this channel was a bit too deep for comfort as I tried to get to the wader roost this morning. 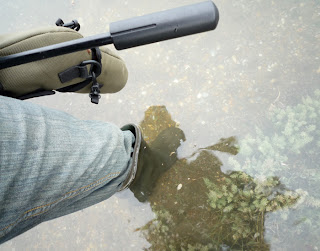 It was worth it though, had 1080 Oystercatchers, the highest count on The Point this year. 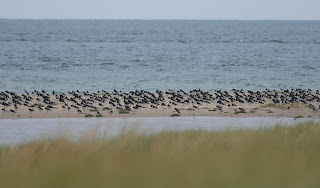 Yesterday saw the first proper Wigeon movement of the autumn, with a few good flocks going past out to sea being a delight to see returning. A delight somewhat tempered by the knowledge that some local cretins will be eagerly anticipating shooting the things. Why wildfowling is still considered acceptable behaviour in this country is beyond me! 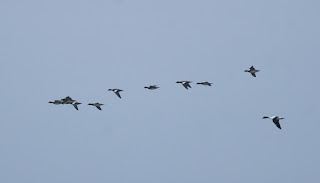 And finally, our Swallows are close to success with their second broods, this little chap was guarding the entrance to one of the sheds, and will soon be bombing around nailing migrant Silver Y's. 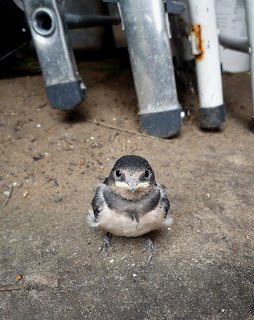