Today got off to a disastrous start as I got up too late for any good seawatching (Rookie move, I won't be caught out like that again this Autumn), but was rescued in fine style.
While checking Near Point late in the morning, a warbler popped it's head out of the suaeda, showing a bloody big supercillium and a large pale bill. That was enough to set the pulse racing as we had high hopes after seeing news of Greenish Warblers arriving further North. It soon jumped out fully to reveal a whacking great wing-bar and seal the deal. Greenish Warbler has been a bit of a bogey-bird for me, i've never seen one in the UK even after spending seasons at places like The Farnes (which scored today I see) and The Point, so I was on cloud 9. The bird was however being a right little shite and a nightmare to see in the suaeda so we left it be. An hour or so later I went for another look and was delighted to find that it had moved to some nearby bramble bushes, where it showed excellently for the rest of the afternoon, in front of an admiring crowd. 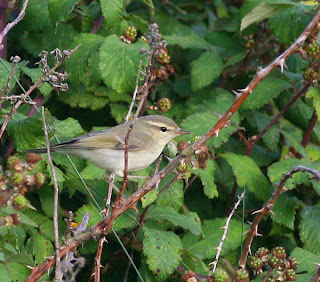 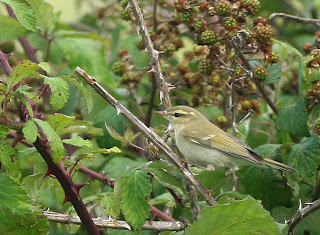 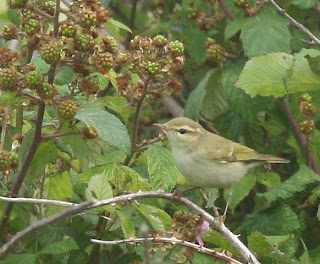 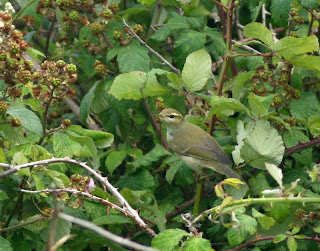 There were hardly any other migrants on The Point today, which is somewhat typical of Greenish Warbler days here, 'The biggy travels alone' as they say!