Long-term readers of this blog will be aware that every now and again I like to flee the UK for a birding trip of epic proportions to some far-flung corner of the world. I've spent the last three years absolutely aching to get away again but have been restricted in time and fundage by university. Now that that's all over its time to hit the road again, and at the end of October I set off on what could well be the most epic of my trips yet.
My previous short visits to Nepal have encouraged me to return there for a proper trip, so i'm going to be spending 4 months birding my way around the trekking routes of the Himalayas.

The current plan is to something like this:
After arriving in Kathmandu, fly to Tumlingtar, and then trek the route, only recently opened to independent travellers up to Makalu Base Camp and back. The restrictions on this route have mean that very few westerners have birded it, but Satyr Tragopan, Fire-tailed Myzornis, Blood Pheasant and Grandala are all a possibility, as are Red Panda, Snow Leopard and Yeti. From there, it's up the Arun Valley to Lukla, the gateway to the Everest region. I won't have time then to explore around Everest so i'll head down the original approach route for Everest expeditions through the lowlands to Jiri, where i'll bus it back to Kathmandu.
Back there i'll be meeting up with some of my family, and then head up to Pokhara, for the trek up through the heart of the Annapurna region to Annapurna Base Camp over Christmas. From there i'll probably carry on solo around the Annapurna Circuit, trying out the new trails that have been created to avoid  the major new road project, and a couple of quick side trips up towards Dhaulagiri and Mustang. I'll cross the Thorung La pass to the east side of the circuit, and take a few days to visit Tilicho ice lake, claimed as the highest lake in the world, before reaching Manang and returning to Kathmandu again. Then i'll meet up with my old mate Joe Parkes, who trekked Annapurna with me in 2008, and we'll take 3 weeks starting on the Helambu trek, over the Laurebina La to the sacred Gosainkund Lakes, then down to the Langtang Valley and up to Kyanjin Gompa, exploring as far up valley towards Tibet as we dare, before heading back to Kathmandu.

After that, i'll still be in the country for another month, and haven't worked out where to go yet, there's just too many options, possibly the Manaslu circuit, the Ganesh Himal, a return to Lukla to visit Everest Base Camp and Chukkung Tse (at 5883metres the highest peak climbable without a mandatory guide) or maybe i'll have had enough of mountains by then and bird the lowlands of Chitwan and Koshi Tappu, or maybe just mong out in some Buddhist retreat for a month?

However, past trips have rarely even come close to following original plans so i'll probably end up doing something totally different ,whatever happens though, its going to be an amazing trip, I can't wait! 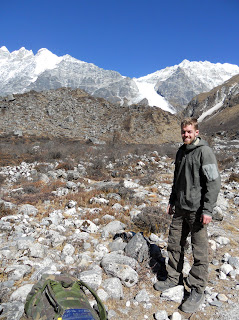 
I've recently added a new page about Birding in the Nepal Himalaya to the bar above, check it out to see why I love the place so much. I hope to gradually add more stuff to it to make it useful for anyone else planning a trip out there, in the mean time, if you're at all inspired and would like to know more about visiting this superb region, drop me a line.
Posted by Joe Cockram at 3:17 PM

sounds awesome, super jealous! get over to the western terai if you can (and Maoist types allow)...Bardia and Suklaphanta should be on for Florican, big owls and some other bits that are easier here than in chitwan.

Wow, what a superb trip you've got lined up, Joe. I'm envious but looking forward to reading about it.