Anybody who's been birding in the UK for a decade or so will have noticed a decline in Ortolan Bunting records, from a scarce but regular visitor, to a genuine rarity. Blakeney Point holds the first Norfolk record for the species, way back on 12th September 1884, and a whopping 106 were recorded here between 1950 and 2005 (Stoddart & Joyner 2005), but the  decrease in records is really quite shocking. In the 1950's, 41 were recorded, 26 in the 1960's, down to 12 in the 1990's and, though I don't have the records to hand, there must have been barely a handful in the 2000's, and I don't think there have been any yet this decade. 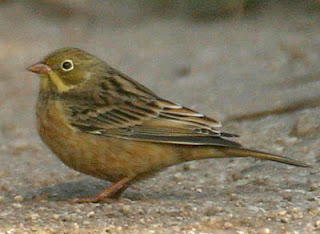 Obviously part of this fall has been the agricultural revolution that has destroyed populations of many of Europe's farmland birds, but I was shocked to see this  video by CABS (Committee Against Bird Slaughter) filmed in France earlier this autumn.

Clearly trapping of Ortolans is rampant in certain parts of the country, and this must be having a devastating effect on an already struggling species. Check out the CABS website for more details about the extent of this shocking industry and what you can do to help out. I've had the pleasure of working with some of the CABS guys in Malta and can say that they are the most dedicated bunch of conservationists you could hope to see, really putting themselves in the line of fire (quite literally sometimes) to stand up for what is right. We could do with a few more like them on this planet.

Finally, apologies if you ended up reading this post expecting to see news of an Ortolan on The Point, but if this sort of thing continues to happen, the chances of seeing one here are going to get slimmer and slimmer, unlike the wallets of those working in this disgusting trade.
Posted by Joe Cockram at 2:34 PM