My crikey, The Point really is on fire this week.

Whilst doing some actual work this morning we heard tell of a Bluethroat down near The Hoods. After finishing off the jobs we were doing we sauntered down, no birders and a whole lot of suadea. A bit of a nightmare scenario with a bird like a Bluethroat we thought. We decided to walk through the suadea in the hope of flushing the bird, and amazingly, after just a few minutes it flipped up and over a bush on the edge of the saltmarsh. We retreated to a nearby dune hoping that if we sat and waited quietly it would come out to feed, and sure enough it obliged us handsomely. The bird soon hopped out onto the shingle revealing itself to be a cracking male red-spotted, one of my favourite birds. To our great surprise, it performed amazingly well, feeding right out in the open, not too far from us, another magic Point birding moment! 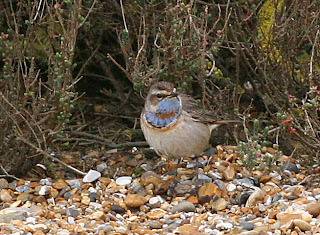 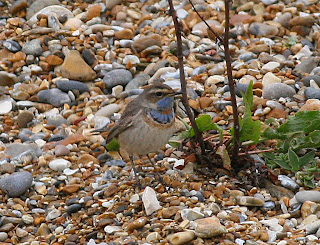 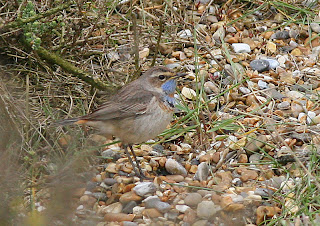 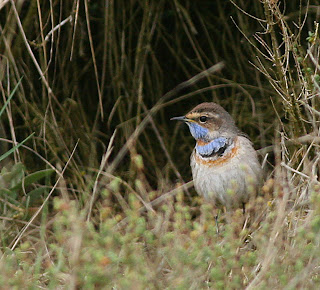 A much more typcial view of a Point Bluethroat: disappearing into cover 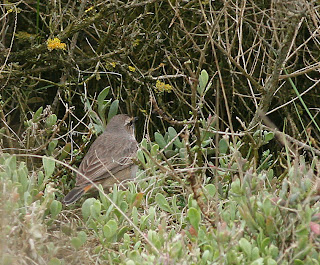 Later on in the day I was out on the beach waiting to talk about seals to any visitors who came along (I know, more 'work' and on a Sunday too, it's a tough life sometime), and of course I had my scope with me to seawatch during the quiet times. I wasn't expecting much given the calm conditions and the date, but late afternoon something terrible happened- The one that got away!!

Scanning along, I picked up a very distant 'shearwater' flapping and gliding low over the water. It was clearly not a Manx, Balearic or Sooty and thoughts turned to Great, as unlikely as it would be. It had that more calm looking flight of a large shearwater, very effortless even without any assistance from the wind. The bird was very dark, with just a white underbody. The underwings were dark though, I've not seen all that many Greats, but I thought they had pale underwings. It wasn't that different in size from a Manx either, only just a bit bigger, but seemingly more 'solid'. Twice I thought I saw a pale area around the front end, but it was just too distant to tell, and then it was going away all too soon, and gone.

I hadn't considered a pterodroma while watching the bird, as I assumed they always did that batshit crazy loop-da-loop stuff in flight, but after a suggestion from a friend that they fly differently in calm weather, I thought I should watch a few videos. There are surprisingly few Fea's videos online, the scilly pelagic one (with the superb backing vocals) being the best, but there are a few of Zino's. On watching these, my heart sunk. I rushed back out in the vain hope that maybe the bird would pass back around, but after a few hours nothing had happened, and I headed back to the ranch, with a bit of a sicky feeling in my tummy.

I'm not claiming anything, I don't even know for sure what it was, but i've seen enough of the commoner seabirds to know that this was something different, and until I see a Fea's Petrel, this evening is going to be replayed in my mind an unhealthy number of times. I've never had 'the one that got away' feeling before, but now that I know it, it's not pleasant. Still i'm here for another 4 months, and that's a lot of potential seawatching time. And one can never feel too bad on a Bluethroat day, eh!