The Circus comes to The Point- Pallid Harrier!!

WAAAHH!!! It gets better.
This morning I had to take the quad bike down to Cley to pick up some food supplies. On arrival at the beach car park I checked my phone to see a whole heap of missed calls and voicemails from my colleague back at the Lifeboat House, always a worrying sign. First voicemail up 'someones had a monties or pallid fly up the point', sheeeyet! I had driven right along the waters edge, and birds always move up the inland side of the shingle ridge, I must have passed right by it. I quickly picked the stuff up and drove back up, cursing my fortune and assuming the bird had done as most migrant harriers do and carried on up the coast. Luckily it was a beautiful day and I was enjoying the ride up when suddenly a 'thin-winged' harrier flipped up over the dunes to my side. I braked and ran to the nearest tall dune, just in time to see the colony of Sandwich Terns and Black-headed Gulls go up on Far Point. Bugger, I had caught up with the the bird but still managed to miss it, as it surely continued to the mainland after passing over Far Point. After returning to the house and dropping stuff off I headed out to scour the dunes just in case, and had barely left the garden when I got another tantalising glimpse as again the bird flipped over a dune, and was gone before I could even get my bins up. This was getting really frustrating! Eventually we picked up the bird flying distantly over Yankee Ridge, but it was too far to i.d. with bins. After disappearing again it seemed to pop up from no-where and gave a reasonably close flyby showing off a delicate pale collar and dark neck, clean underparts, a pale trailing edge and only small dusky tips to the primaries, it was a PALLID! The first i've seen in the UK.

After giving us such a run-around in the morning, the bird settled a bit and showed superbly well, giving some really close views, even allowing us to determine it as a 2cy Male (the yellow iris sexes it). 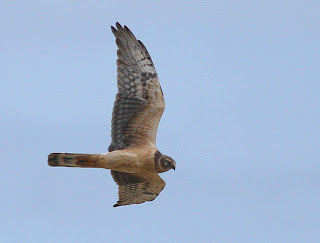 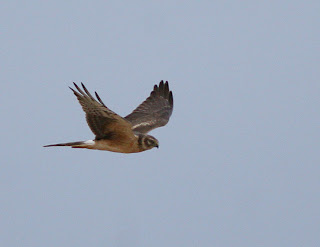 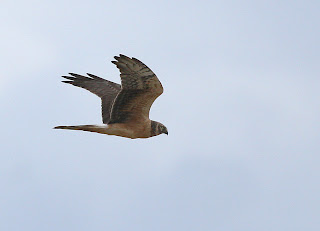 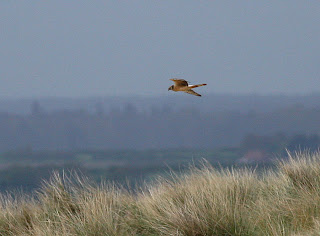 It was easy to see why it had been so elusive earlier as it was travelling extremely fast, using the wind expertly. It would disappear behind one dune, and pop out from behind another at the other end of the point just a few seconds later. It was fantastic watching it at work, a brilliant bird in so many ways. I am one happy chappy this evening!