Well, against all odds, and despite the best efforts of the Himalayan winter, I've made it back from Nepal and home to Somerset in one piece.

Once JP arrived and we got permits sorted, we set off on the long bus journey up to Langtang National Park, up near the border with Tibet. The 8 hour ride was predictably hellish, and not helped by me throwing up so violently that I fainted, a slightly scary experience. Somewhat wobbly-leeged, we jumped ship at Dhunche, ready to start the trek in an alternative manner to the suggested route. First day was a big climb up to Sing Gompa, the highlight being a superb pair of Yellow-throated Martens that gave brilliant views near an army barracks at Dimphe. the forest below Sing Gompa was alive with birds, with Fire-tailed Sunbird, Himalayan Bluetail and Spot-winged Rosefinch being particularly nice. The hillside above SG was disappointingly empty on a quick 'warm-down' explore in the evening. 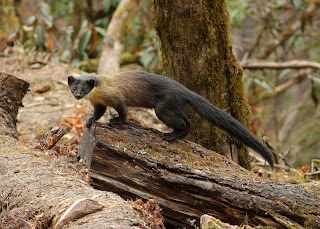 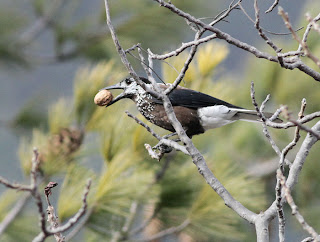 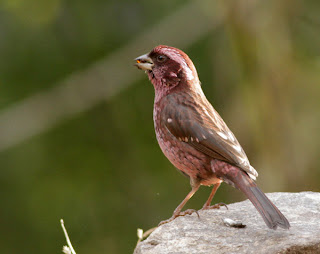 To our great surprise, when we woke up the next morning, snow was falling heavily. Fortunately we were heading downhill that day so it wasn't too much of a worry as far as route finding was concerned. We hurried  on down to Thulo Syabru, and arrived just as the falling stuff turned into some really heavy rain. The bad weather seemed to have forced some things down the slopes and the fields around the village were alive with Green-backed Tit, OBP's, Plain-mountain Finch, and Plain-backed Thrush. 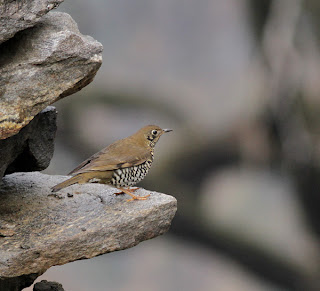 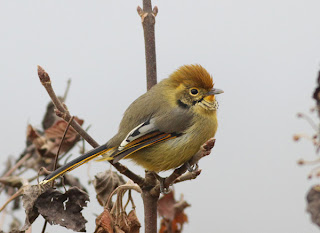 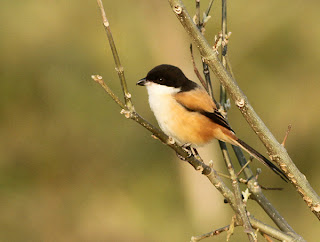 The sky cleared the next day and we enjoyed beautiful sunshine over the next three days trekking up to Kyanjin Gompa at 3800m, with the avian highlights being a Maroon-backed Accentor in bamboo scrub just below Thulo Syabru, a flock of Grandala feeding in the snow above Ghora Tabela, and regular flybys from Lammergeiers. 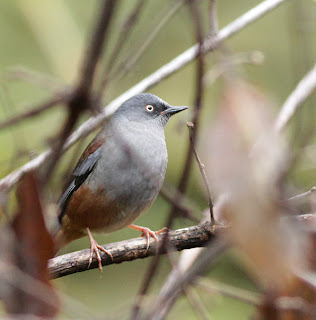 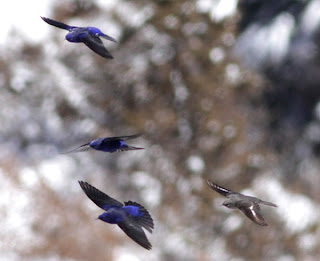 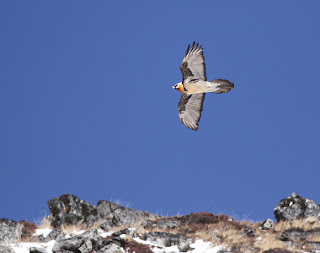 There was deep snow above Ghora Tabela, and Kyanjin Gompa was a totally different place to what it was 2 years before, it was absolutely stunning. An afternoon climb up to the 4600m Kyanjin Ri was well worth the effort (knee deep in snow with no trail to follow), rewarded by stunning views of the surrounding mountains and glaciers. 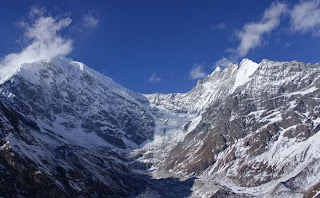 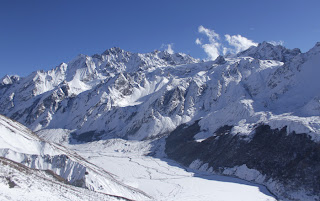 We trekked back down the valley, staying overnight at Renche, a much better stop than the favoured Lama Hotel, its position just up the slope giving it significantly more hours of sunshine. The next morning, we set off early and had been going less than 5 minutes when we rounded a corner in some bamboo scrub and BOOM, male SATYR TRAGOPAN, sat in the middle of the track. This stunning crimson, silver and blue pheasant locked eye contact for a few seconds, then head down, jumped off the path and down the steep slope. I dumped my rucksack and somewhat recklessly ploughed down the hill after it. Unsurprisingly, I didn't see the bird again, but that brief encounter was enough to make the whole trip worthwile. Satyr Tragopan has been the bird on top of my 'must see' list ever since I looked it up in the books after first hearing of it in Mark Cocker's 'Tales of a Tribe'. As an impressionable 16 year old whose most adventurous birding was probably the East Cliffs on Portland, reading the tragic tale of Alan Adams and his fatal quest for the Tragopan really opened my eyes to the lengths people went to in order to search out the best birds in the world, and inspired me to start planning for my first trip. Life has been rather interesting ever since.
Emotional as that brief moment was, the trek continued, and we we slogged back uphill to Sing Gompa. From there we were faced with the daunting prospect of crossing the Laurebina Pass, beyond the sacred lakes of Gosainkund. The Lonely Planet says something along these line about this leg of the trek 'the pass is dangerous after snow, and trekkers have perished here floundering in deep snow. If there has been heavy snowfall here recently, return to Dhunche'. Well, there had been heavy snow, but there was no way we were quitting now, mainly because we couldn't face the bus journey back to Kat, and we had met a couple of trekkers who had come over the pass in the opposite direction (though they told some pretty hair raising stories), so we decided to give it a crack.Starting early morning from the grim lodge at Laurebina, we trekked hard and fast up the hill, stopping only for a group of Snow Partridge, a quality lifer. 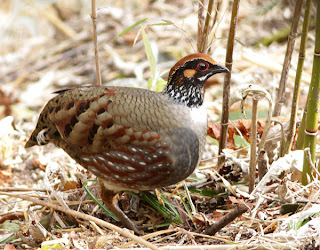 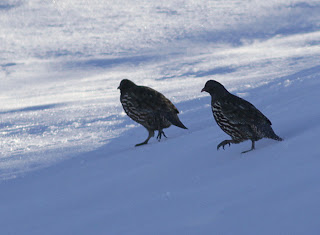 The lakes at Gosainkund were as spectacular as expected, and we were astonished to find a Sadhu living up there in the snow. I started thinking about how nuts religious folk can be for their beliefs, then realised that I was up there birding, not so different really. From Gosainkund up to the pass was tough, and I mean real tough. For the most of the time we were wading knee deep from snow, struggling to follow the tracks left by previous trekkers as they had been obliterated by wind, and climbing steeply all the time.
It was a great relief to reach the pass, but the way down to Phedi was equally difficult going, and we were in quite the exhausted state when we finally rolled up late in the afternoon. From Phedi back to Kat was an absolute cake walk in comparison. And that was it, my winter in the himalays was over. After a couple of days kicking around Kathmandu and the near foothills, I returned back to rather soggy Somerset to try and work out what to do with my life. First priority is to be at Ham Wall early tomorrow for the reported Pied-billed Grebe, after that, who knows?
Posted by Joe Cockram at 10:06 PM