As planned, we were down at Ham Wall nice and early, a little too early in fact, as thick fog was hampering the search for the Pied-billed Grebe. Could have stayed in bed another half hour!

Eventually, as the fog started to burn off a little, the bird swum out from the reeds right in front of the viewing platform. It looked great through the scope, a really smart bird, the first i've seen in summer plumage. The visibility was still too poor for photos though, but hopefully you can just about make out what it is. 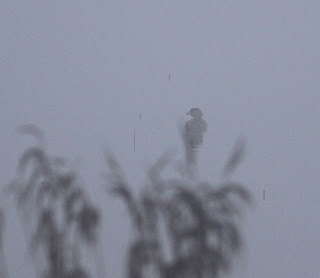 Glad to hear your back safe Joe, you're more than fit enough for the Fair Isle third; probably too fit!! if you are looking for bird work! Only joking, glad all went really well. all best wishes;
Pete Morgan.

Thanks Prof, good to hear from you. Hope all is well with you, maybe see you down at Portland this spring if I don't find myself working at the other end of the country!
all the best