This afternoon I went on my first long-distance twitch for a year so. I actually walked the entire distance from the Beach Car Park at Cley, all the way to the North Hide to go take a look at the Pacific Golden Plover that has been around the last few days. I wasn't planning on making the effort to walk from 'our end' of The Point, but as I had to take the recycling down to Cley on the quad, I thought it would be rude not to wander over to take a look. Fortunately the bird was much closer that it had been earlier in it's stay and gave great scope views. This is the first PGP i've seen in the UK, and the first i've ever seen in summer plumage, a really smart bird.
It was a bit too far off for conventional photography so I resorted to digiscoping, a technique that I appear to woefully inept at, practice needed! 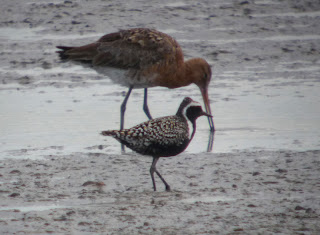 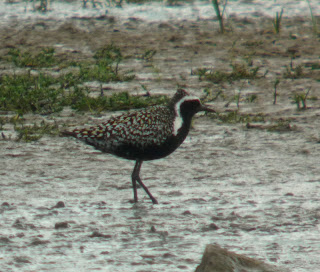 From first impressions this bird looks more like an American Golden Plover I think, but closer inspection revels some barred white feathers at the rear of the flanks, and in the under-tail coverts. It also called a few times while I was there, which is obviously a help.

And yes, updating this is far more appealing that watching that shoddy excuse for a football match!