Once back in Tumlingtar, a week earlier than planned, I realised that I had a whole heap of time to spare, and that rather than follow my original plan of trekking up to Lukla, and then out to Jiri for a bus back to Kathmandu,  I had the option of punching North from Lukla and up into the Khumbu, Everest region, home of the Sherpa's, and the greatest mountains on Earth. To maximise my time in this mystical region however, I would have to get there quickly, so bins were stowed away in my backpack, and I absolutely missioned it through the lowlands (anything below 3000m is classed as lowlands in Nepal), and within a week I was at Namche Bazzar,  the gateway to Everest.

Here the birding began in earnest. A 'rest' day in Namche to acclimatise had me chasing Himalayan Monals and Blood Pheasants up and down steep grassy slopes, eventually getting incredible views of these stunning species.


Top quality raptors were frequently seen, Golden Eagle and Himalayan Griffon Vulture patrolling the high ridges, and I even saw a Lammergeir overflying Namche from my Hotel room!

After the agonising, upping and owning crossing passes between Tum and Namche, the trekking up here was a doddle, just gently following valleys uphill, gaining no more than 400metres a day to prevent AMS. By the time I arrived in Gokyo I felt really quite fresh and rested, despite being st 5000m, I had acclimatised well by now, and seen a whole heap of good birds on the way up, flocks of Grandala, the males an unbelievable plush blue velvet, Guldenstadts Redstart, hopping around the edge of a sacred lake (complete with resident Ruddy Shelduck), Alpine, Altai, Robin and Rufous-breasted Accentor strutting about like the pimped up Dunnocks they are, and Tibetan Snowcock feeding around village edges like chickens.


And the moutains, oh, the mountains. There was always one particular peak dominating the skyline at any given time, changing as my perspective changed as I moved up the valley. First was Thamserku, then Ama Dablam (If Everest is 'mother goddess of earth' then Ama Dablam is her vindictive little sister, a real vicious looking mountain, put on this earth to kill people with too much of an adventurous streak), then Taboche, Cholatse, and up above Gokyo, the mighty ice wall of Cho Oyo. Trekking up the valley from Gokyo was a spectacular way to spend an afternoon, culminating in my first close (relatively speaking) views of Everest from 'scoundrels viewpoint' above the sacred lakes, where I filled my water bottle with ice-cold water, milky with sediment eroded from these great peaks.


From Gokyo came what was always going to be a tough trek over the Cho La, a 5460m pass complete with glacier. Knowing that, as an ice-novice, traversing the glacier alone would be silly, borderline reckless, I gave myself a lie-in to allow the couple of groups staying in the same village as me, a chance to get there first and their guides to make out the path over. 2 hours I gave them but after just 90 minutes trekking I had overtaken them, they just trekked too damn slow, even with porters carrying their heavy gear. So as it was, I was first man up to the pass that morning, with a beautiful, pristine looking glacier to negotiate. Sod it, how hard can it be I thought, and pressed ahead. Really flipping hard it turns out. After just a few minutes I found myself off the crisp, grippy snow and on clear, blue ice, slippy as hell as the morning sun warmed it. I knew I was in a bad bad place, but I was too far to turn back and I thought that if I took it easy I could make it over. Next thing I knew I was on my arse and sliding downhill at gathering speed, I was desperately trying to perform a fingertip self-arrest but the ice was too smooth, I was rocketing downhill at a hell of a rate, towards the big icefall at the end of the glacier . Suddenly, SMACK, a large, conveniently placed, and very painful lump of ice slowed my descent and I managed to grab hold of some icy ridges. From there, a quick shaky scramble saw me safely on the right side of the glacier. It had all happened a bit too fast to be scared, but looking back, lets just say I was in quite a spot of bother, probably the worst situation i've been in in all my travels, and thats saying something! 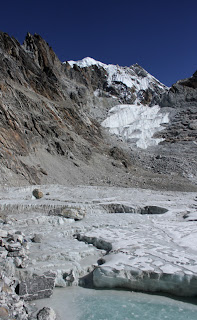 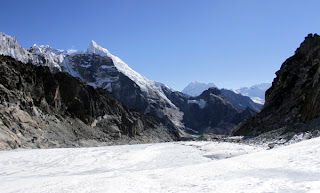 After that experience, I hurried down to gentler slopes, but 2 days later found myself climbing up to Chhukung Ri, at 5546m, a 'personal best' for altitude, and with stunning views up at Lhotse and Nuptse, and down at their respective glaciers, with a novel new view of the backside of Ama Dablam.

Downhill back to Namche I stopped 2 days at Tengboche, with its famed monastery, but to be honest, I wasn't all that impressed with this much acclaimed place. Back to Namche it was for more pheasant watching, and then down to Lukla, where the weather had me stuck for a few days waiting for a plane out. Eventually, I was booked onto the first flight of the day, and I was waiting nervously at the airport gates at dawn under clear skies. After a delay due to flog at KTM, the plane, a tiny old Dornier eventually made it in and we were hurried onto the tarmac and up into the tiny aircraft. The reason for the hurry became apparent as we rocketed down the runway and over the cliff edge before rising up into the valley, a massive bank of cloud was piling up towards us from the lowlands. We ploughed through it, and after an hour I stood relieved in the haze of Kathmandu, possibly the only flight to make it out that day!

Well thats me up to date from Nepal, for now. Tomorrow i'm off to Pokhara to start it all over again in the Annapurna region. There will be more hastily written nonsense when I return in god-knows-how-many weeks. I should probably take this opportunity to wish you a Happy Christmas, and a bird (or whatever it is that interests you) filled New Year. Cheers
Posted by Joe Cockram at 11:52 AM