So, from Kathmandu I flew out to Tumlingtar, right out in Eastern Nepal. The flight was spectacular in itself. Stunning, though distant views of the Himalaya, it was like a 'who's who' of mountains; Gauri Shankar, Thamserku, Nuptse, Lhotse, and of course, just peeking out from behind the Nuptse ridge, with the legendary South Col just visible, Chomolongma, Mother Goddess of Earth, Mount Everest herself! Soon enough though we were whizzing low through valleys, with impossibly steep, lush green  terraced fields seemingly little more than arms length out of the window, and the Arun Koshi winding its milky blue way southwards below us. And then suddenly, out of nowhere, a runway perched on the clifftop receiving us for a bumpy landing. An absolute helter-skelter of a flight, and never to be forgotten i'm sure. Makalu awaited. 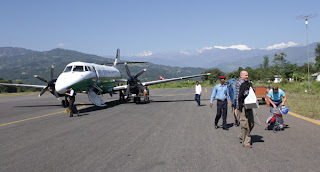 
For this first leg of the trip I did the unthinkable and hired a guide, forced by an apparent total lack of trekking infrastructure. The first few days of the trek were a bit of a nightmare to be honest. The lowlands were hot and humid, and we mainly followed a dusty road through fields of millet, with little forest. A lightning strike by some stomach bug did little for my strength and moral, without going into the gory details. 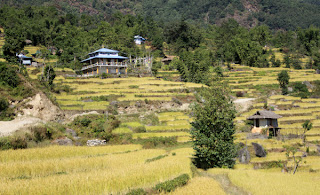 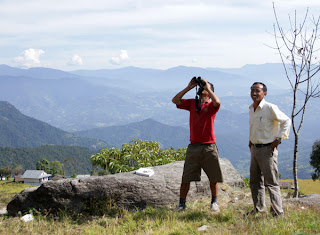 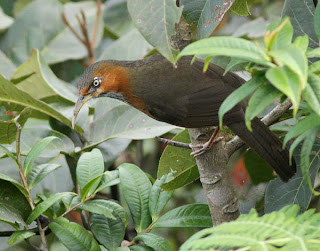 Day 3 saw us drop down to the river, and then climb back up, to my delight into some fantastic primary forest, which continued for a few days. You know the sort, misty, mossy, orchids growing out of standing trees, and filled with birds. Absolute crackers like Slender-billed Scimitar Babbler, Chestnut-headed Tesia, Scarlet Finch, and the stunning Fire-tailed Myzornis. The area above Tashigaon in particular was awesome, especially for thrushes with Chestnut-bellied Rock Thrush, Plain-backed Mountain Thrush and Grey-winged Blackbird all on show at once, with Great Barbet and Red-billed Leiothrix providing the soundtrack. 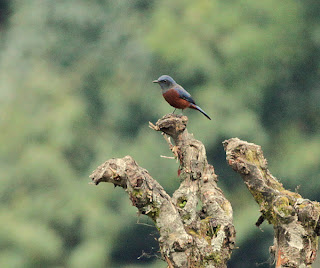 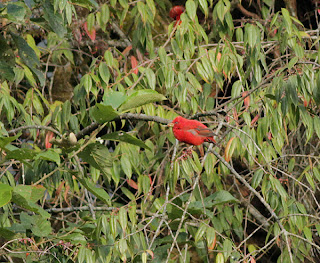 Further uphill we emerged into the Rhododendron zone. The stuff which i've previously assaulted so viciously in attempts to remove it from Brownsea Island (the sensible Dorset Wildlife Trust part, the National Trust like it on their land for it's scenic value, fools), here was a wildlife haven, Himalayan, White-browed and Rufous-breasted Bush-robins, Fulvous Parrotbills and Rufous-bellied Eagle being the stars around Kongma. 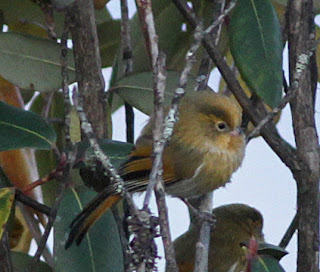 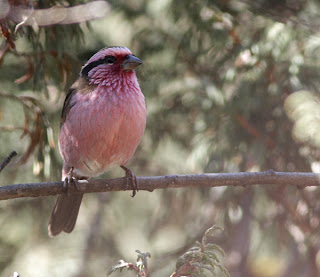 From Kongma the trekking got tough, up and over the 4216m Shipton La, named for the great explorer himself, who discovered the pass with the equally legendary Edmund Hillary during the 1952 Everest recce. It truly felt a privilege to be following the footsteps of such men. High up here, the vegetation was as thin as the air, and the birdlife reflected this; Upland Buzzards soared eagle-like above flock of Snow Pigeons and Plain Mountain Finch, while solitary Rufous-breasted Accentors eked out a sparse living amongst the rocks. Dropping down to the relative oasis of Yangle Kharka (via the cold dark hole that is Dobato), more birds appeared in coniferous forests, though were a bugger to see. 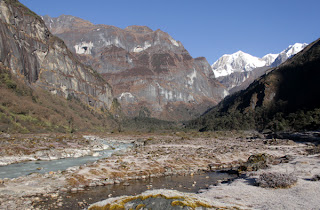 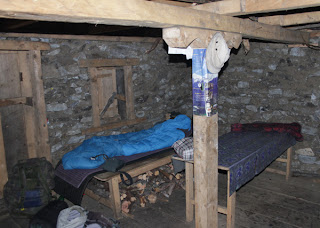 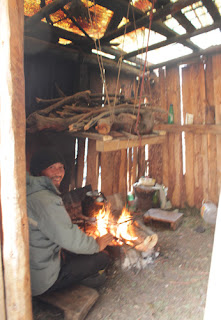 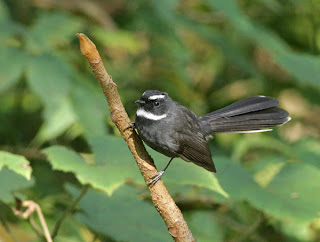 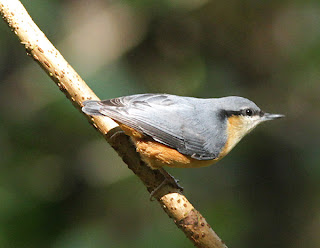 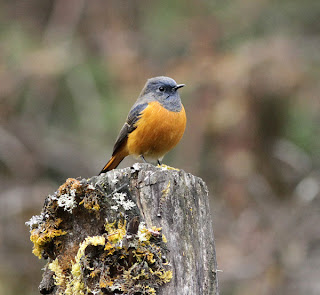 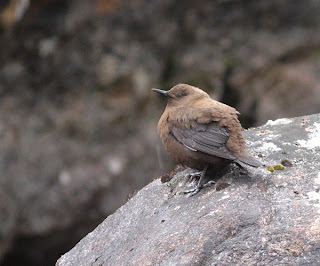 White-winged Grosbeaks noisily cracked seeds deep in juniper bushes, Brown Dippers whizzed up streams, and Red-headed Bullfinches called softly from the centre off rhody bushes. A flooded clearing above Jak Kharka held one of the best birds of the trip, the globally vulnerable Wood Snipe, but this was pretty much the last bird of the climb. A long breathless day saw us reach 'the throne of the gods' Makalu Base Camp. A squalid patch of gravel on glacial bed, but surrounded by the immense, towering peaks of Baruntse and Makalu and various subsidiaries. Here, at around 5000m I was feeling the affects of AMS so after enjoying the views, a hasty retreat was beat, and with worsening weather we were back in Tumlingtar in record time. 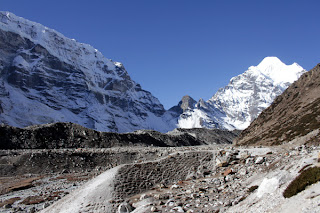 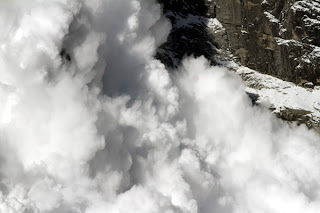 AVALANCHE!! The other side of the valley fortunately 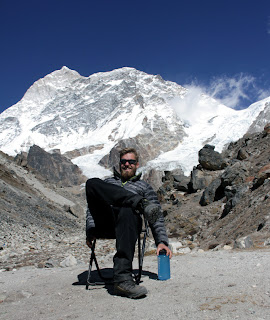 Taking a well earned break at Makalu Base Camp

Thats all I have time to write for now, but there's plenty more to come. From Tumlingtar came an absolute mission up to Lukla and up into the heart of the Khumbu. I'm back safely in Kathmandu now, but my god, a hell of a lot has happened over the last 6 weeks, I only hope my feeble tapping on the keyboard can come vaguely close to describing it.
Posted by Joe Cockram at 12:34 PM

Great to hear from you again Joe. Record ringing number at PBO this year. Can't wait to hear more.