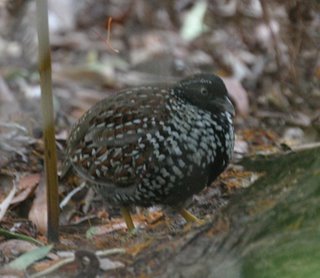 black breasted buttonquail in the gloom 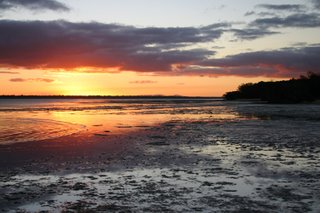 sunset over fraser island from the campsite 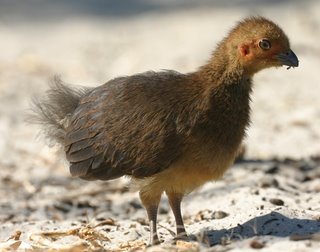 Baby bush turkey that almost found its way into the wok 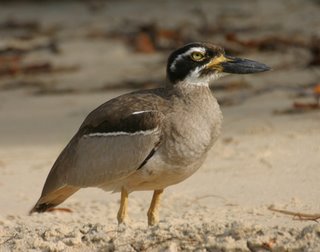 i'm back in rainbow beach noe after a cracking weekend at inskipp point. as there are no buses between rainbow and the campsite at inskipp i decided to walk the 15km and try and hitch a lift on the way. luckily i was picked up after a few km (very handy as i was carrying rather a lot as all drinking water had to be carried in as there was no facilities on site) by a couple of ozzie blokes who were spending the weekend fishing at the point. they seemed alright so i pent the weekend with them in exchange for keeping the fire lit. The two target birds for the trip were picked up within half an hour of arriving with a pair of beach stone curlew a few hundred metres north of the campsite, and black breasted buttonquail were easily found feeding in the leaf litterbetween the cmapsite and the point. other new birds seen were red capped plover, red necked stint, grey tailed tattler and white cheeked honeyeater.
On saturday we went for drive in the guys 4X4 up to the rahter inappropriately named freshwater lake (its been empty for years apparently) and along the beach, great fun. spent the rest of the day fishing off the point which was livened up the prescence of a brown snake that swum across the strait fro mfraser island!
as i was in the area i thought it would be rude not to visit fraser as it is one of the main tourist spots of the area so i blagged a free trip on a barge over for a quick walk around this morning.
i'm expecting to feel a little sore tomorrow morning after spending the afternoon hurling myself down the sand dunes back here in rainbow beach, great fun!
Posted by Joe Cockram at 1:49 AM