WOW!! Another storming day, this time with Levant Sparrowhawks being the stars. We had been getting steady counts over the last week, but not the big numbers usually recorded. They had obviously all been hanging back as a big surge today saw 3,276 over my watchpoint at Alonim. The counts from around the stations today haven't been totted up, but it should come to over 7,000 I reckon, pretty impressive considering the world population is thought to be about 30,000 pairs.
Same old story applies, too high for close-up pics, but a phenomenal sight nonetheless. Levants migrate in pretty crazy way, they form up in flocks and circle round and round, like the flakes in those little snow-shaker in a jar things, before gliding for a few kms, and then circling again. At one point I had a flock of 1,600 spinning away overhead, really quite dizzying. 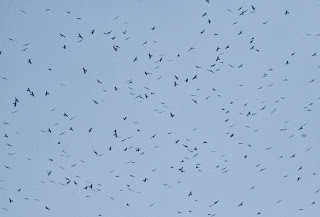 It was a reasonable day for Lesser Spotted Eagles, I had 870, some coming lower than I've had before, and also 4 Steppe Eagles.