This time yesterday I was roundly cursing the birding gods for forsaking me by producing a Red-flanked Bluetail at Durlston, just down the road from my student house in Bournemouth, a mere 18 hours after I had left Dorset for the Easter holidays. I had made what was looking like a shocking decision to head up to Somerset for a few days birding on the Levels with my Dad, before a starting a weeks work tomorrow, and the Dorset departure was looking like a bad move: I still 'need' RFB for Britain, and indeed the world if they're split from the Himalyan birds. There's not many things that i'll twitch these days, but that would certainly have been on the cards, being so close to 'home'. Still, it wasnt going to stop us birding the levels and this morning had been most pleasant, with a whole heap of migrant year ticks; LRP, Ruff, Willow Warblers, Sand Martins, and best of all 2 Swallows, my favourite of all our native birds. Just five minutes from getting back to the car for the last time before departing for East Somerset, we noticed a large bird passing distantly through a gap in the trees, clearly wasn't a heron, bins up and another glimpse before disappearing behind the trees again- BLACK STORK!!!!!! SHIIIIIT!!!!! (wholly accurate representation of the ensuing conservation). The bird looked to be simply heading away behind more trees when it decided to turn around, circle twice and then carry on drifting low North-east, giving us just enough time to get some nice views and blast off a few record shots. Unfortunately my camera, unused for several weeks had switched itself to some horrendous setting and my first shots, of the bird at its closest were overblown something rotten. Luckily, a bird that big manages to burn itself onto a sensor despite the photographers ineptitude and I got the following 'souvenirs': 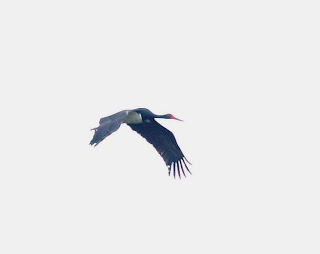 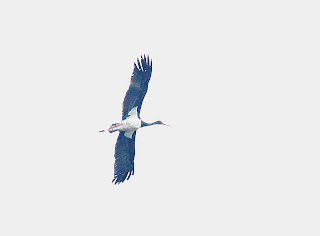 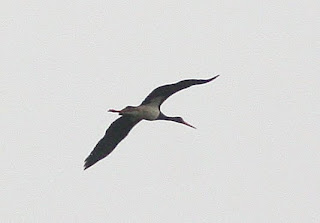 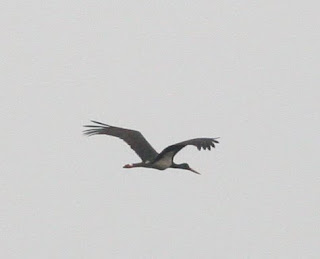 And what's all that about Karma? I hear you cry. Well, on the 10th April i'm off volunteering in Malta with Birdlife at their Springwatch Camp to do my very best to protect migrant birds from being shot indiscriminately. Anyone who watches 'My Name is Earl'-one of the few watchable programs on E4, will know that if you do good things, good things happen back to you. I like to see this as Nature's reward for my upcoming trip. The moral of the story, if you want to find as many good birds as I do (smug much?) do you some volunteering, not neccessarily in Malta, try the RSPB, or your local Wildlife Trust, you never know, it could pay off!
Posted by Joe Cockram at 2:08 PM

I like the way the legs in the 2nd picture have cleverly been removed; is that so we can't see the big plastic ring?

Ha yes, my photoshop skills aren't up to cloning over the ring, so I had to cut the legs clean off. Sloppy I know, but I thought i'd get away with it for longer than this!!

In case anyone is lacking in an ability to spot humour, the missing legs were actually blown out by overexposure. I realised later that the camera still had the same settings dialed in from when I last used it to photograph the moon. Schoolboy error!

See, that kind of thing never happens to me: being unable to go for a bird, then to find something equally good or better instead...well, there was that one time that an Alpine Swift was found late at Tacumshin, and I found five of my own in Cork city, but that's about it.

Still good shots given the circumstances. Please keep us updated on volunteering in Malta- thanks in advance for helping protect European bird species!