Two posts in two days, that is unprecedented productivity for this blog. Anyway, I have this amzing little gadget that tells me how people arrived at this blog, and over the past few days i've had a fair few hits from people googling 'Twitchers in Poole Park'. Now, being a birder living in Poole, the words twitcher, poole and park appear frequently throughout the blog, just not in relation to these queries, ironically really, as I happen to have been one of the twitchers in question.
And this is why, a Long-billed Dowitcher, a vagrant from North America, hatched up in the Arctic tundra last summer, accidentally flew East over the Atlantic on it's migration South last autumn, and after a winter dithering around Western Europe has somehow ended up in Poole Park, and finds it very much to its likeing, feeding just metres away from an admiring crowd of birders and curious passer-bys. 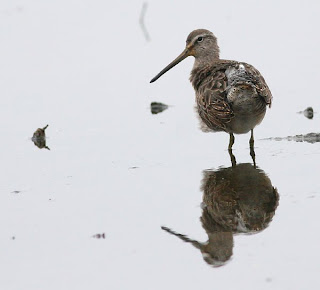 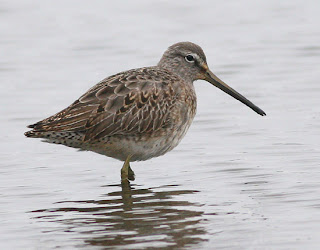 Astonishingly, over the last two days there has also been a Ring-billed Gull, another American vagrant, but I haven't seen it yet so can't share any photos, there are a few here if you're interested though, grotty looking thig if you ask me.

POLITICAL INTERLUDE!!While you're here, take some time to whip over to the 38 degrees site and sign the petition to save our forests if you haven't already, cheers!
Then check this witty (though a little rude, you have been warned!!) song by Frank Turner, who i've wangled tickets to go see in the Students Union in a few weeks. Hits home a little too hard given the current government 'firesale' eh!!