Missing the Point, MISSING THE POINT!!! Shit.
How prophetic those words turned out to be. 9 days after I leave and the lads go and find an empidonax flycatcher. OK, so its not the first for the WP Yellow-bellied that it was first put out as, but anyone who knows how dangerously obsessed I am with finding rares can imagine just how devastated I was when I heard the news.
At that point I realised that I had two options; to crawl into a corner and spend the rest of the autumn crying, or to bird my ass off for the rest of the season and try and find a rarity to match it, however unlikely that would be. Obviously the second option is much more appealing, and aside from spending Sunday volunteering down at Studland with the National Trust, i've been mostly birding during daylight hours. Hengistbury Head has been the site of choice of site for the last 2 days, and was particularly enjoyable today, as I found a Wryneck up on the heath on Warren Hill. Small beer indeed compared to the recent fare on Blakeney but its always nice to find something unexpected and is exactly the sort of thing I need to give me the motivation to keep getting out there over the coming weeks.
Back to the horrible beast that is the empid, I can only repeat what I said about the cornish bird at the time. Willow and Alder are pretty much impossible to seperate. We banded plenty of empids in Canada, Least and Yellow-bellied are pretty straightforward, but even in the hand, Willow and Alder just went down as 'Traills'. There are supposedly methods of seperating the two using biometrics but we tried them and they all turned out to be inconclusive. OK, so Alder is much more likely on probability but what sort of Rarities Comitee adds a species to a National List based on probability. As many people have suggested already, I think the best bet is to just recognise the birds as Traill's Flycatcher and hope that soon some clever bod comes up with a way of separating the two conclusively.
Anyway, and most importantly, massive congratulations to James and Paul for finding the bird. As all the twitchers who visited the point over the weekend will attest too, it is an absolute bitch of a place to bird. Imagine doing that walk pretty much every day over the course of the autumn! This find was a monumental reward for a monumental effort, top marks to the lads, you deserve all the glory you get, and I say that with only a smidgen of the bitterest jealousy. 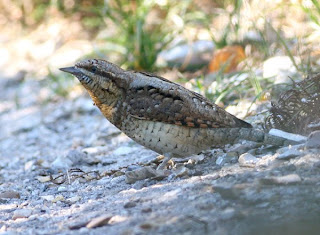 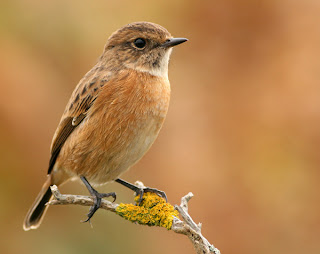 One of many very tame Stonechats 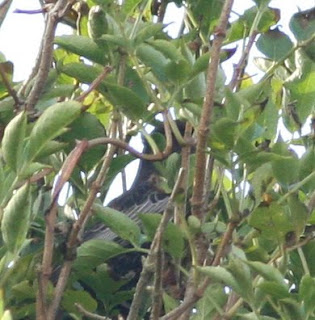 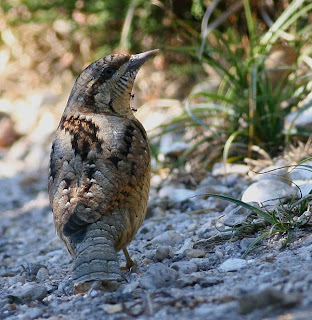 Another one of the Wryneck