Too much to Swallow

A cracking day on the island today with a good arrival from the south.

First up a was a single Red-rumped Swallow in the Top Fields, while looking for that bird, the call came through that there was 2 sat on the wires by the obs.
I dont know why, but I just love Red-rumped Swallows, they're one of those birds that no matter how many you see, it's always worth seeing more. So I legged it down to the obs, arriving just 5 minutes later, thats got to be a record, and even more impressive considering that I was carrying bins and a camera with telephoto lens, and was on the phone most of the way too. And even more impressive considering my spectacular fall as I tripped over a stray bramble vine, sending me flying several metres off track, jamming my bins into my face and getting a dead leg from landing on the pager in my pocket. I now have a nice square bruise on my thigh, thanks RBA!! 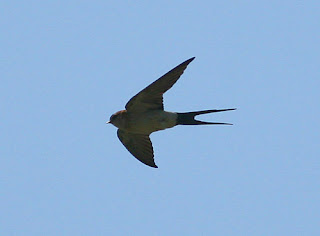 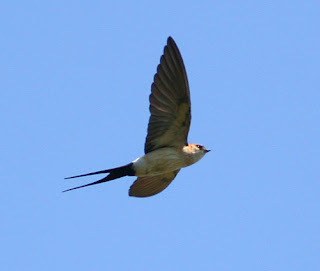 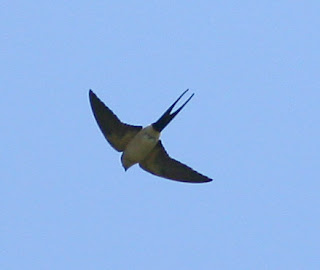 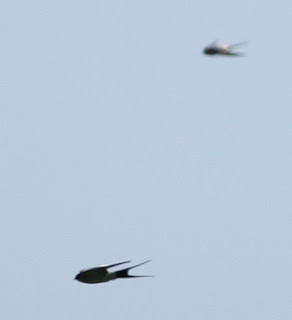 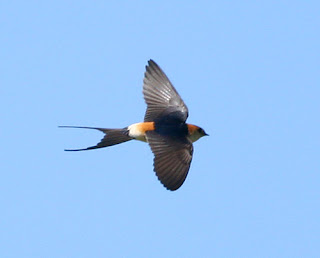 After a good look at these little beauts, and cooking and eating beans on toast in what was probably a record time too, I was back in the field again, arriving at the obs just as a Bee Eater appeared hawking over the Old Higher Light, Get In!! My british bogey bird. I've missed several by a matter of minutes, and only heard 2 (including the one a few days back). It was pretty distant but gave acceptable views before disappearing North up the Island, and despite extensive searching, was never seen again.
A very satisfying day overall, and all the more enjoyable for the sublime weather, I even caught the sun a bit, a very rare event in England for me.

What with todays birds and the Whiskered Tern down at Radipole, things are certainly looking up down here in South Dorset, and hopes are certialy high for the next few days.
It may seem a bit greedy after what we've had already but we're really hoping for a proper 'biggy' to put Portland back on the rarity map. White-throated Robin would do nicely!!
Posted by Joe Cockram at 5:22 PM

Can you do me a favour and update your link to my blog? the web address has changed to http://thebluechaffinch.blogspot.com

Consider it done mate, I wondered what had happened to it!!

But don't call me a twitcher again, mad is fair enough though!!