Well, after a short absence, I’ve finally managed to get a degree of internet access back, and I’ve got shitloads of stuff to write up, so for starters here’s a trip report of a nice little boat trip into the Bay of Biscay.

Bored of the usual rubbish late summer seawatching off Portland, I joined fellow South Dorset birders John Down, Mark Forster, Dave Foot and Duncan Walbridge for a ‘mini-cruise’ on the Pride Of Bilbao, from Portsmouth out to Bilbao, in North Spain and back again over 4 days from the 5th September. We met at the ferry terminal on the evening of the 5th, and stood up by the bar on the back of the boat with the intention of counting the Navy ships in the harbour to send the details off to my pay-masters in Moscow, unfortunately the boat was a few hours late leaving and we had to make do with trying to watch Black-headed Gulls in pitch darkness with Johns sooper-dooper new binoculars.

Thanks to the late departure the captain proper hooned it down through the channel overnight to make up for lost time, meaning the boat vibrated like hell and nobody could sleep a wink, tosser. Still, we all made it up on deck for first light (though some sad gits were so excited that they were up bagging the best positions well before sun-up). First bird through was a Bonxie, and they proved to be bird of the day with 24 recorded. The Seabirds stayed pretty quiet, and apart from 3 adult Sabines Gull, there wasn’t much of any interest. A few passerines landed on the deck, including a Wheatear and a Redstart. Highlight however was a warbler sp. that zipped past before disappearing onto ‘Monkey Island’ the top observation deck reserved for tour operators. I was so desperate to see a decent bird that I vaulted the fence erected to keep us riff-raff out and legged it up the stairs to the viewing deck to look for the bird, only to be told that I wasn’t allowed up there and was hastily removed from the premises, much to the amusement of the gathered birders below. With the lack of seabirds, and once we were a decent distance down into the Bay of Biscay, we turned our attention to Cetaceans. The flat sea provided ideal conditions, and in the hours before it got dark I managed 3 Cetacean ticks, Fin Whale, the second largest mammal in the world, of which we had about 20, 3 Pilot Whale and 4 Striped Dolphin, well backed up with good numbers of Bottlenose Dolphin and Harbour Porpoise and masses of Common Dolphin, including one pod of several hundred. Also interesting were 2 Ocean Sunfish. 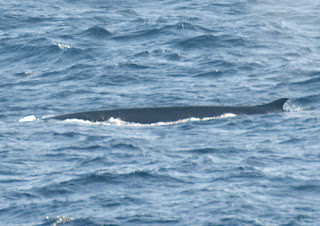 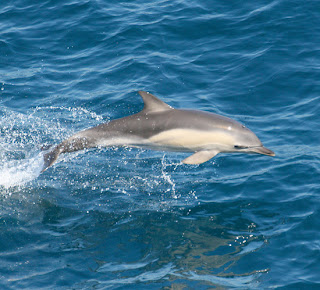 We arrived in Bilbao harbour at dawn and quickly passed through customs, waved our bins at the nearest taxi driver and pointed at the big hill just inland from the port. Luckily the drivers are used to birders and knew exactly where to take us. 5 minutes and an outrageous 20 euros later, we halfway up the hill and in some decent looking scrubby habitat. Apart from a few Tree Pipits flying over, migrants were pretty thin on the ground but there was a good selection of resident birds, with several Red-backed Shrikes, a little group of Serin and 2 calling Sardinian Warblers, sounding like somebody firing a machine gun at us from the bushes. A flock of 12 Chough were unexpected, and I used my skills practiced at Portland the previous week to pick out a flyover Ortolan Bunting which landed and gave us good views on the deck, which was nice as all the Portland birds had been flyover only. Walking back down into town we picked up a couple of Melodious Warblers and a the last gasp, as we were actually in town, 6 Griffon Vultures drifted over with a single Booted Eagle tagging along.

We just got back onto the boat in time to leave at midday and hopes were raised by a Sooty Shear, a few Arctic Skuas and 2 Storm Petrels not long after passing the breakwaters, unfotunatley that proved to be just about all the seabirds for the day. It was to be an excellent afternoon for Cetacea though, with as many as 6 Sperm Whales that gave excellent views close to the boat, another cetacea tick for me, backed up with another 20-odd Fin Whales right up until dusk.

Usually on these trips, the last day steaming up the channel is the quietest day, but this proved to be the best, at least in the morning. Highlight was 4 Minke Whales seen early on, yet another new whale for me. Best birds were 24 Bonxies, 2 Stormies, 3 Sabines Gulls and 2 Balearic Shearwaters. The only other cetaceans were occasional Common and Bottlenose Dolphins and Harbour Porpoise. Around midday we hit a bank of murky weather and it was time to retire to the lower decks to watch some pathetic minor nations rugby team being hammered by the Aussies.
After docking there was just enough time to dip on the Wilsons Phalarope at Stanpit March on the way home. 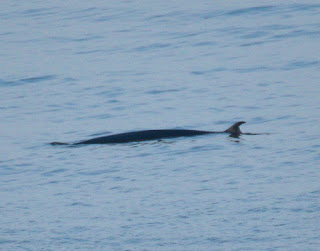