Thanks to the World Wide Wonder that is BirdForum i found myself on a long weekend trip to Finland over the last few days on a once in a lifetime chance to twitch one of the rarest birds in Europe, Azure Tit. These birds, which apparently breed in Kazakhstan or some other terrorist infested country are normally very difficult to see anywhere but this winter up to 6 birds have been recorded in various parts of Finland and have been twitched succesfully by good numbers of British birders taking advantage of cheap flights from Ryanair (Anybody who wants to whinge about Carbon footprints and environmental responsibility can get bent!). Over the last few weeks though, the Azure Tits have gradually disappeared (and one turned out to be one of those p(l)eskii blue tit hybrids) leaving only one that we stood a realistic chance of seeing.

After meeting up with Brian Stone, Martin Coates and Richard Allison the previous evening we headed to Stanstead at stupid o'clock where we joined Justin Lansdell and Andrew Wilkinson for the flight out to Finland
We arrived in Tampere airport at midday in temperatures hovering around the -20 C mark and drove North to Uurainen, where another bunch of brit birders had seen the Azure Tit the previous day, and the bird had been coming tothe feeders every day of the previous week. It was looking very hopeful with the feeders being a hive of activity of common tits along with several smart borealis Willow Tits and Crested Tits, plus a few Mealy Redpolls. However, at dusk 3 hours later there was no sign of the bird and we were all extremely cold, as well as slightly pissed off ,but we had no choice but to head on North up to Oulu for the night. on the way up we heard that the group who had seen the tit the day before had seen a Sparrowhawk fly past the feeders holding something white and hadnt seen the Azure Tit afterwards. Just great, the only reliable Azure Tit in Europe had been twatted by a sprawk a day before we got there, we had come all the way to Finland just to see a washed out willow tit. 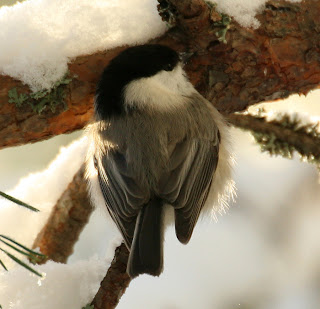 After the disatrous news from the day before we decided that we ought to spend the day seeing as much of the local specialities as possible, rather than attempt to see the Azure Tit that had been seen on the nearby island of Hasomethingorother, which would entail a long drive across the frozen sea and a search through a 5km long reedbed. The bird had not been seen for a week and to not see it or any local goodies would cause the whole trip to be a complete waste of time.
So we enlisted the serivices of local guide Aapo who took us off to a park in Oulu where a good feeding spot had been set up.
We trekked out through the forest, dodging the cross country skiers on the way. The feeders were buzzing with common tit species and after a short wait the target bird arrived. A Siberian Tit. It quickly grabbed a peanut from the feerder before flying up into a nearby spruce to scoff it, giving us excellent views, a very tidy little bird and a great relief to see something good having put in alot of effort for no return so far. 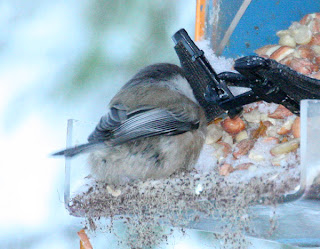 Siberian Tits arse (sound like something off of Father Ted)

While watching the tit we got a call from Mike Edgcombe and his team with the incredible news that they had just seen the Azure Tit at Uurainen, the air was so thick with expletives that you would have struggled to cut it with anything other than a very sharp Samuri Sword. It was too far to get to the site to see the bird so we decided to continue birding around Oulu and get to Uurainen for dawn the next day.
Cheered massively after this news and seeing the Sibe Tit we headed to a nearby suburb where a flock of pine Grosbeaks had been seen earlier in the day. The birds were soon located feeding by the side of the road and gave excellent close views, calling frequently and scoffing some rather unpalatable looking berries along with a few Waxwings. A small flock of Mealy Redpoll briefly held a stonking snowball Arctic which soon flew and a possible Lesser Redpoll. 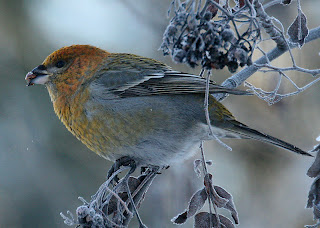 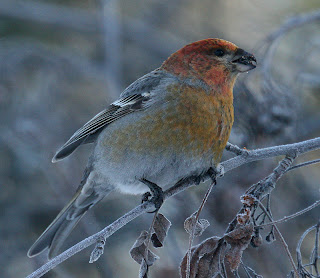 
We then headed East out to Vaala where a Hawk Owl was allegedly coming to Voles being chucked out by a local farmer. Despite a brief car malfunction we arrived at the site on time and there in front of was one of the most amazing birds to grace the pages of my first Lars Johnsson bird guide. On schedule the vole was placed out on the snow and the Owl swooped down right in front of us, snatched up the Owl before devouring it up a nearby Spruce. What a superb bird and one that i had wanted to see for a very long time. After this teriffic sighting and with another chance to try for the Azure Tit the next morning the groups morale couldn't have been further from what it had been the night before. We weren't even disappointed by dipping Siberian Jay at a nearby feeding station. 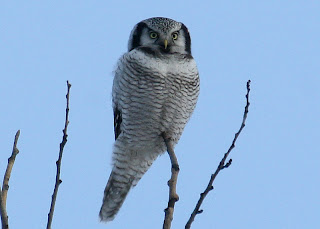 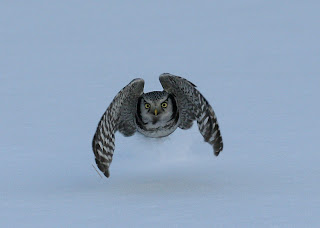 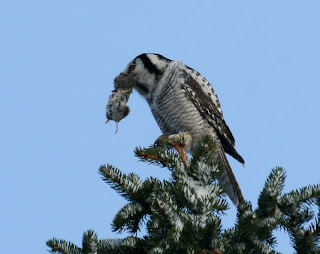 The Hawk Owl. What a fantastically brilliant bird!!

After a long drive south the previous evening we arrived at Uurainen at dusk ready to tick off the Azure Tit straight away then drive to the Airport via Siberian Jay, assorted woodpeckers and a dusk visit to a Great Grey Owl.
Unfortunatley, rare birds seldom have any respect for such plans, and 3 very cold hours later the bird was nowhere to be seen, shit! We couldn't leave and try for the other birds in case the tit showed up after we left, so we agreed to stay on until either the bird showed or it got dark.
Thanks to the shockingly cold temperatures and a lot of inaction we had long lost feeling in our toes so Justin, Martin, Richard and a couple of Finns went for a walk down the road to get circulation going, leaving Brian, Andrew, me and a load of Finns, complete with Finn sticks overlooking the feeders very dejectedly at no.93. A few minutes later a finns phone rang and then Brians, something was happening! a glance down the hill saw Richard jump out into the road waving frantically, fuck, they had the bird. We legged it down the hill, trying not to slip on the ice and there it was, a bloody Azure Tit, holy cow! After showing briefly though a cold, panic, exhaustion and adrenalin induced haze the bird disappeared back over our heads into the forest. Luckily it soon returned and showed excellently in nearby trees and feeders. 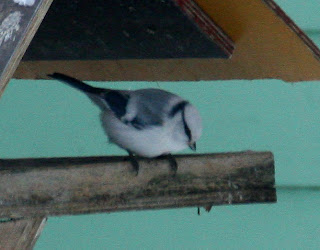 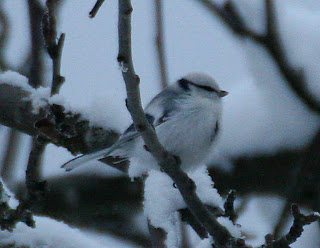 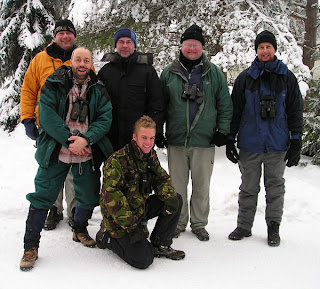 A cold but very happy group at the Azure Tit site

After getting our fill of this supreme bird we realised we still had time to go for the Great Grey Owl south of Tampere. So a few hours later and with the light fading we arrived somewhere else that i can't pronounce. There was no sign of the Owl but a pair of caudatus Long Tailed Tits were very nice and a few crossbills with calls varying between chip chip and chup chup. Just as it was starting to get dark we picked up the Owl flying over the other side of the clearing before perching up in a distant tree. We hot footed around to the relevant corner of the clearing and had fantastic views of this monstrous Owl perched up not too far away. Yet again, this was nother of those birds that i've wanted to see ever since picking up my first 'Field Guide to the Birds of Britain and Europe'. It was far too dark to take photos and all icould manage was this horrifically noisy effort, even with mirror lockup, self timer, ISO shitthousand and a shutter speed long enough for the bird down pick up a passign vole and return to its perch. 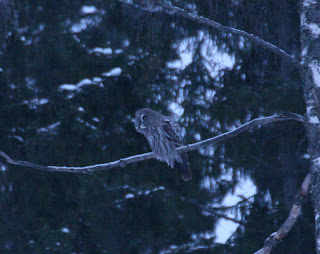 The Mother of All Owls (along with Hawk Owl of course)

We returned to the airport just on time but thanks to the useless bastards at 'The low efficiency Airpline' the plane was delayed until the following afternoon, and annoyingly didnt quite leave us enough time to go for the Siberian Jays a few hundered k's up the road.

We finally arrived back in England only 14 hours late but not particularly pissed off about it thanks to the trip being so damn good. It was certainly a case of quality over quantity with 'only' 5 lifers for me but including some of the best birds in the Western Palearctic, wherever the hell that is.
Posted by Joe Cockram at 8:04 PM

A classic read and great memories mate. Went to Copenhagen this weekend with the girl and bagged the Black-throated Thrush down to 2 metres and guess what, it was sodding cold and another foot of snow fell while we were there. Roll on spring......
Cheers Jus