You're probably thinking something along the lines of "What!! Joe's Birding Blog has been updated, that can only meant that he's found something rare and wants to brag about it to anyone who cares to listen"

Well, thats pretty much spot on. Autumn on Blakeney Point has been absolutely brilliant. With 2 Icterine Warblers, a Barred Warbler, a Marsh Warbler and a Bluethroat over the last few weeks making this August the best for a long old time.
Searching for the Bluethroat this morning, we were delighted to find a Lapland Bunting, the earliest record ever for The Point. We were pretty chuffed with this and assumed it would be taking the 'bird of the day' slot.
A last gasp tramp around the Long Hills soon trumped this however, when we flushed a small, sandy warbler with white outer tail feathers from the suaeda. Logic decreed that such a bird could only be a Booted or Sykes's Warbler, and soon enough the bird jumped up onto the suaeda tops, showing off its short bill, relatively strong head pattern and contrasty tertials, definately a Booted Warbler, GET IN!!!!!!

The bird proved to be very elusive and mainly only gave flight views, though it did perch up a few times, giving some reasonable looks to the few birders who came along to see it. 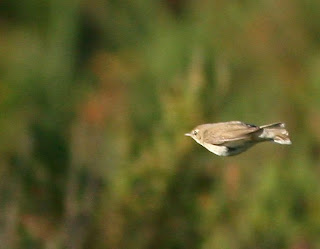 My best attempt, possibly qualifiable as a record shot?! This shot is pretty typical of the views we got. 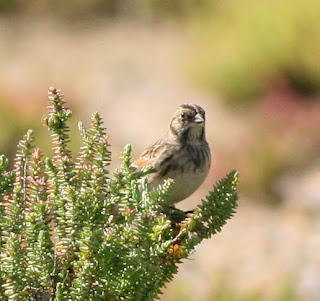 The Lapland Bunting on Far Point 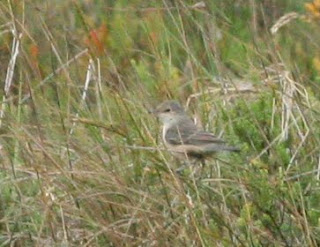 Barred Warbler from a while back. 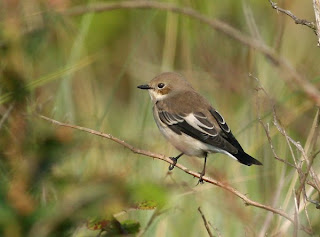 One of a good number of Pied Flycatchers so far this autumn. 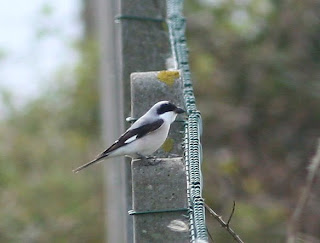 I dont generally twitch these days, but this Lesser Grey Shrike at Kelling made a nice day trip for me and a visiting birding friend from Canada with the excuse that he needed it for his world list.
On a totally different topic. I have managed to totally break my phone recently (too much birding in the rain in), and having recently lost most of my e-mail contacts, and Facebook being blocked on the work internet server I use, I am pretty much un-contactable with the outside world. If you're a friend of mine and want my new number, or think I ought to have yours, just drop an e-mail to my usual address.
Posted by Joe Cockram at 10:10 PM

Nice to meet you, fab flight picture of the Booted Warbler!!!

I only got back to Coastguards at 9.20pm after photographing the Lapland drinking from a puddle and then home at 10.30pm so have no energy to post my shots tonight! My blog is pennyshotbirdingandlife.blogspot.com - will be adding the shots tomorrow.

Matt the maker of slays said...

Hey man, good work with the booted! Contrary to earlier plans I won't be in Norfolk at all over the autumn as I am working in the good old US of A for a few months. Hope the season there continues to be a good one!

Good to meet you on Tuesday, and thanks for the Lap Bunting directions. Nice blog, I'll put a link in from mine (devonbirding.blogspot.com)