OMG, WTF!!!! Yes, I just went birding ,and guess what, I really enjoyed it.
Last year, after moving down to Poole/Bournemouth, my birding effort was embarrasingly pathetic. Having spent half the year living on the Farnes, with all sorts of cool seabirds and potential rares literally on my doorstep, it came as a bit of shock to find myself in a situation where I would have to catch a bus or walk for a while to get into a decent bit of habitat, this, along with plenty of other uni-based distraction resulted in me going birding about 5 times in the last 3 months of the year, a very poor show.

Now, i'm not really one for New Years Resolutions, all this bollocks about turning over a new leaf, becoming a better person and shit like that .If youre a rubbish twat in 2009 ,chances are you're going to be a rubbish twat in 2010. However, before I came back down here from Somerset a few days ago, I did promise myself that i would get out and about a bit more, and even decided to do a self-found year list to help motivate me. I got bored of the list somewhere between writing in Great Tit and Blue Tit (probably at Coal Tit come to think of it) so i've sacked that off, but the reasoning is still there.
Yesterday I went out to Holes Bay, where I was happy to see that it was low tide, Dorset birders will know that Holes Bay is never at low tide, somehow, its always lapping around the footpath and hence has shit all waders there, but yesterday it was absolutely rammed with birds. 500 odd blackwits, nearly 300 avocets and crawling with redshanks and dunlins. Unfortunately, I didnt take any gloves and my fingers actually stuck to my tripod so I cried off home earlier than I should have but I had seen enough to tempt me out again this morning. 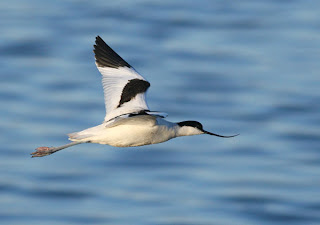 This morningI went down to Baiter Park, where there were 14 spanking Med Gulls, all but one of which (a 2nd winter) were adults, like this one. 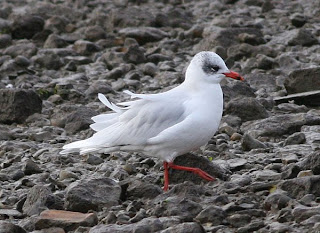 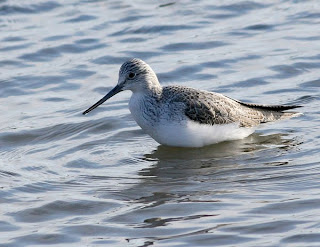 A greenshank was showing nicely right next to the path 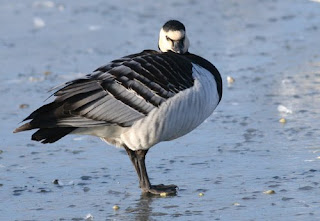 Over the railway line this Barnacle Goose was sat on the ice with Canada Geese at Poole Park. A little bit dodgy maybe, fuck it, if i was still keeping a self-found year list I'd have that straight on there
After a six-pack of hot cross buns from sainsburys for lunch (my way of banishing any remainign thoughts of christmassy times and looking forward to easter), it was off to Hatch pond for a spot of filthy twitching. The goal was to see the Bitterns that have been hanging around all winter and started showing well now that the ice is forcing them out of the reeds. Shortly after arriving, one bird flew over and into the reeds: 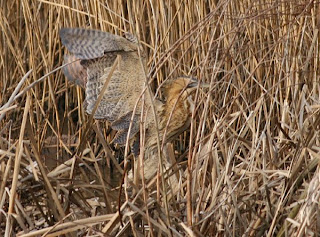 Probably the worst photo of a Bittern ever, and my first (and still only) shot of this species ,as it dropped into the reeds.
After landing ,the bird only gave occassional glimpses of eye or bill from deep in the reeds. Walking around to the other side of the pond, a second Bittern was sitting on the edge of the reeds but quickly turned around and crept back in. 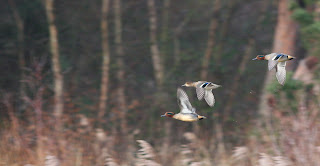 Little groups of teal were whizzing around the place. My favourite duck I think 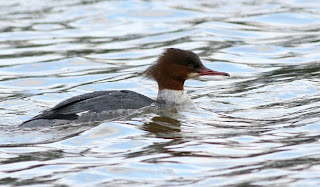 This Goosander wsa fishing close into the edge of the pond, at one point it tried to pikey a fish off a Cormorant, but quickly got told where to go.
And finally, in an attempt to get ove the cold, heres a pair of Scarelt Macaws patrolling the rainforest in a toasty southern Costa Rica pretty much this time last year.