Well, thats it. My time on the Farnes is over. After 6 fantastic months at at one of the most amazing places in the world, i've moved back down South to start a degree in Ecology and Wildlife Conservation at Bournemouth University.
The Autumn had been really slow migrant-wise on the islands until this last week, and then it all went absolutely mental. Last Friday, a Minke Whale cruised North between the islands and the mainlands, and I managed to get decent views of this dinky whale and secure a British cetacean tick. We were all really happy with that, but what happened next blew us all away. On Sunday, the skipper of a dive boat gave us a call to alert us to a Humpback Whale off Longstone, the most easterly of the island group. Frustratingly, Longstone was blocking our view so we sped out in the zodiac to the Big Harcar to get a clearer view. By the time we got there the beast had moved a fair way to the North but we were still treated to the incredible sight of this 40-ton monster breaching clean out of the water, and coming down with an almighty splash. As far as worldwide wildlife spectacles go, witnessing this behaviour has got to rate up near the top, so to observe it in British waters was just phenomonal, definately the highlight of my year so far.

Surely things couldnt get any better, but on monday they surely did. A quick trip over to Staple Island ib the morning revealed a Barred Warbler lumbering around the sparse vegetation, a long awaited first of the year on what has become a very reliable site for this species on recent years. 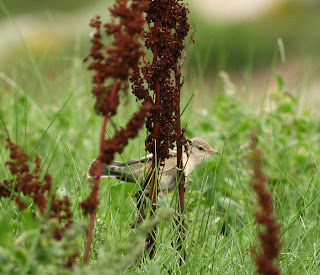 A seawatch soon after saw good numbers of Manxies passing close by, and then unbelievably, more cetaceans, this time 3+ Risso's Dolphins that lingered off the South end of the Islands for c10 minutes, giving good views of their tall dorsal fins and scarred bodies, proving that they really are so much more than 'gay sharks'. The Risso's were a cetacean world tick for me, so I was feeling pretty bloody happy.
An hour or so later, David Steel and Jason Moss, the 2 birders on Inner Farne, came over to have alook at the Barred Warbler with us. At one point, the Warbler flew a short distance and dropped into a weedy gulley, only for another bird to jump out onto the rocks, a Bluethroat!!!! 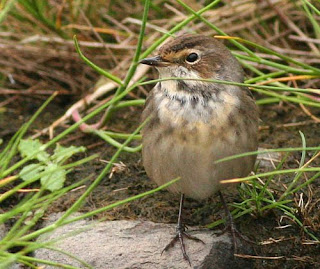 Quality stuff, having birded Staple thoroughly earlier, this was clearly a new bird in, something mega wa happening. Inspired by this, we drove out to Longstone, where we greeted by a Goldcrest, 2 Willow Warblers and 2 Lesser Whitethroats scarmbling around on the seaweed, and then, a Common Rosefinch appeared too, this was just getting better and better. 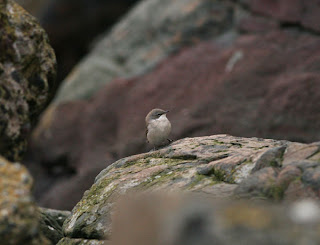 It was starting to get dark by now, so headed back to Brownsman to celebrate a superb day. As we walked up towards the cottage, a chunky, pale bird flew up from the nettles at our feet. As it flew away, I knew immediately that it was a bird I had never seen before, it just looked wierd. luckily it landed on the wall of the veg garden, bins up, and, BLACK-HEADED BUNTING, HOLY SHIT!!!! The bird dropped down behind the wall straight away, leaving us rolling around on the ground, punching the air and generally going apeshit until we realised that we really ought to crack on with the ardous task of ruling out Red-headed Bunting. The bird showed well on the ground before flying back to wall giving us great views through the scope and allowing me to grab some record shots in the gloom. 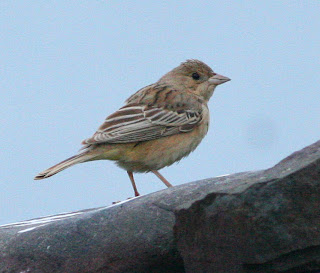 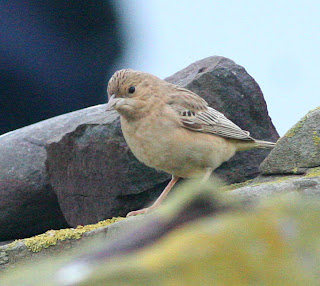 The black streaks on the crown, shadow of a black-face and rufous tint to the scapulars are all spot on for Black-headed Bunting. Some books are pretty useless when it comes to identifying immature black/red-headed bunts but it seems that with good views there shouldnt be too much of a problem.

The Fairies + the Brownstain said...

Dont bother phoning us (not that you would), our phones are fucked by the harsh environment we're living in.

Scotty too hotty, the Hickster and Little Moss

looks like you've been having fun...oh for a carefree life...didn't fancy doing a degree at Slapshod then? ha ha

Joe, I need some advice - I'm off to Oz for a month in November and wondered if you might recommend some decent birding spots/contacts. I have about a week in Melbourne (3rd-8th), two weeks to get from Brisbane to Cairns (8th-21st) then ten days in Darwin. Apart from the usual birding hotspots, did you visit any less-known spots that may be along my route? Any tips on accommodation too? Paluma looks good I think?

Anyway, any useful/useless info you can pass on will be most appreciated.