Raptor numbers have slowed right down this week, it just feels that almost everything has passed through now and we're just getting the stragglers. The running totals reflect this as we're pretty much up to 'par' for what is expected for each species. That said, we're still getting a few interesting birds, one counter had 7 species of Eagle today!
It was an 'interesting' day for pipits on Monday. In the evening, after the count we were scoping out a freshly cut alfalfa field when a Marsh Harrier swooped low across the field and took a swipe at a small flying bird but only glanced it. The targeted bird made a beeline for us, and deterred by our presence, the harrier broke of the attack. The small bird fluttered past us and disappeared into the vegetation at the edge of the field. We soon found it cowering and were surprised to see that it was a Richard's Pipit, the first any of us had seen in Israel. A quick check revealed that unfortunately it had a broken leg, a damaged wing and had lost its tail. It's highly unlikely that it could survive such injuries but we put it back in the bush in the slim chance that it might, I imagine it will become prey for a Kestrel, snale, mustellid or maybe even the same harrier. Not a pleasant experience, and a shitty way to see a 'lifer' for two members of our team, but that's nature I guess.

Earlier in the day I had much more enjoyable close views of both Red-throated and Tree Pipits at my watchpoint at Ginegar. 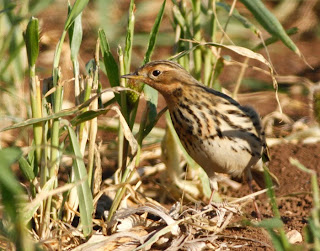 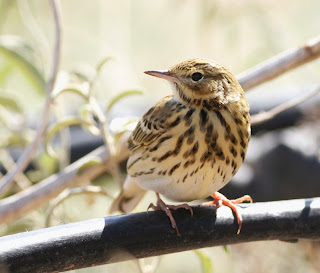 Today saw a bit of a movement of Steppe Buzzards. We get very few here compared to the staggering numbers at Batumi, apparently this far South they migrate across a very broad front, too broad for our small team to cover (and many to the East of Israel) so its up to the Georgia folks to count them where they are concentrated. 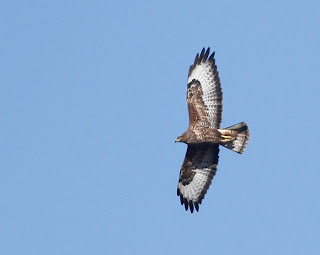 Tomorrow is my last day on the count, the plan is to finish earlier than usual and head off down to the Dead Sea for a day and night birding before I fly home. Fingers crossed for Sooty Falcon for raptor sp. number 25!
Posted by Joe Cockram at 7:00 PM